The latest information you need to know!

.When Mimi was diagnosed with autism at the age of two, she could barely communicate. Now four years old, Mimi communicates using sounds and words, skills that were taught and nurtured through the Social ABCs program. Read Mimi’s full story: kidsbrainhealth.ca/index.php/2022/03/07/the-social-abcs-mimis-story/

The Social ABCs is an early intervention program for toddlers with diagnosed or suspected autism and those showing signs of delayed social communication. It is led by psychologist Dr. Jessica Brian who co-developed the program alongside psychologist Dr. Susan Bryson Dalhousie University.

The Social ABCs is delivered to toddlers between the ages of 12 to 36 months because this is when brain development happens quickly, and when relationships with their primary caregivers are critical. The program is parent mediated, meaning trained coaches work directly with parents to help them learn strategies for helping their toddler communicate and interact socially. The main goals are for the child to share positive emotions, such as a smile with their caregiver, and to direct their vocal communication to their caregivers. While many types of autism supports exist, Dr. Brian says the Social ABCs is unique because it’s focused mainly on supporting the parent to help their child learn and grow, and it’s strengths-based, meaning only positive feedback is given.

“The Social ABCs is meant to be an intense intervention, with the expectation that parents will use the skills they’re taught on an ongoing basis with their little ones at home,” says Dr. Brian. “We want parents to feel empowered to know they have the tools to support their child. We also don’t expect the Social ABCs to be the only thing families will need, but we do see it as an enriching foundation and great start for many families.” 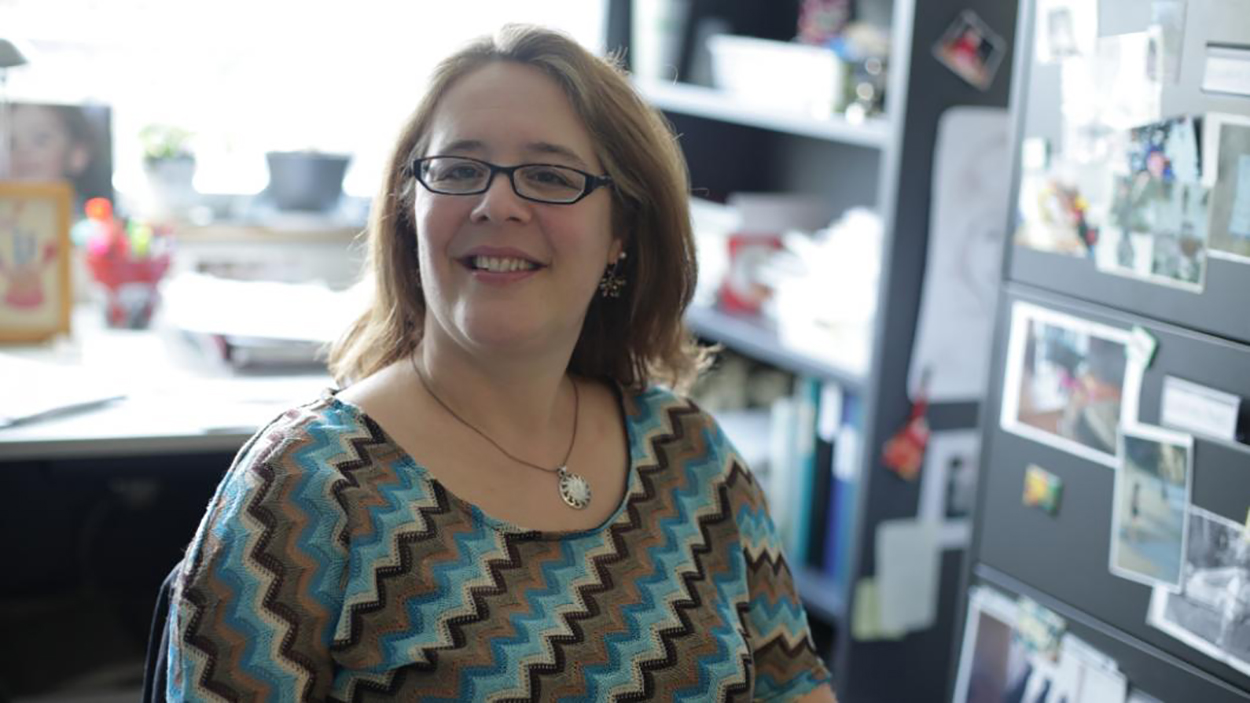 A new program will launch in PEI to provide early intervention for children living in the province who are awaiting an autism assessment from a psychologist.

A new program will launch in PEI to provide early intervention for children living in the province who are awaiting an autism assessment from a psychologist.

The Social ABCs program is a parent-mediated, evidence-based early intervention program for children identified as possibly having autism spectrum disorder (ASD), providing families with intervention support at the first signs of concern, even before diagnosis. Parents are engaged to play a major role in the program.

The program was co-developed by Drs. Jessica Brian, co-lead of Toronto-based Holland Bloorview Kids Rehabilitation Hospital’s Autism Research Centre, and Susan Bryson, Professor Emerita in the Department of Pediatrics and Neuroscience at Dalhousie University. For the past several years, the Social ABCs program has been offered by Holland Bloorview through research and clinical programs, both in an individual family and group setting.

“The Social ABCs team is delighted to partner with providers in PEI, in support of their commitment to increase access to evidence-based intervention for young children showing early signs of possible autism spectrum disorder and their families,” says Dr. Brian, who is also a clinician-investigator at Holland Bloorview’s Bloorview Research Institute. “The intervention itself is founded upon building strong partnerships between families and providers – we know the strength of positive partnerships and are excited to work with PEI on this impactful initiative.”

Social ABCs will be offered by provincial health authorities in PEI to children between the ages of 12 and 36 months. The program has been successful in other parts of Canada, where parents have seen a significant increase in positive affect-sharing and social communication in toddlers.

“Families, service providers, and community stakeholders have long advocated for this type of early intervention program on Prince Edward Island,” said Ernie Hudson, Minister of Health and Wellness. “We are happy to provide this service to Island families as we work together to provide the best services and outcomes for children with Autism Spectrum Disorder. As one of the first provinces to offer this service pre-diagnosis, we are ensuring there is no lag between when a child is identified and needing support and when their family receives this help.”

PEI has Canada’s second highest prevalence of autism, affecting one in 59 residents according to Public Health Agency of Canada data. Nationally and globally, rates of autism are increasing. At the same time, access to assessments with trained professionals has not increased at the same pace, meaning longer wait times for assessments.

While Health PEI is hiring an additional psychologist to address these wait times, the Social ABCs ensure young children are able to get the support they need during a time in their development that it is most critical.

“Waiting for diagnosis can be a stressful process for families because early intervention has such a positive impact on learning, social skills and daily function for children on the spectrum,” said Minister of Education and Lifelong Learning and minister responsible for autism coordination Natalie Jameson. “We will continue to work across government, with service providers, community stakeholders and families to improve autism services and supports.”

Health PEI expects to launch the program this summer. Recruitment is starting now for a Social ABCs project lead and coach, which are anticipated to start this spring. Following certified training, they will begin working with families to empower and educate them in providing interventions to their children. Training in the model will be provided by the Toronto-based Social ABCs team, together with collaborators Drs. Bryson and Isabel Smith from Dalhousie University, as well as a lead trainer based in Halifax.

In addition to PEI, the Social ABCs team has trained clinicians at two major Ontario hospitals, Children’s Hospital of Eastern Ontario and McMaster Children’s Hospital, with an ongoing training initiative with Glenrose Rehabilitation Hospital in Alberta, and several upcoming provincial training opportunities and global partnerships in Israel and India. 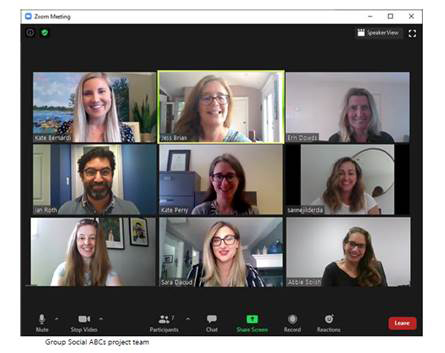 In rapid response to Covid-19, our team developed and delivered a webinar of our virtual coaching model that attracted over 800 professionals from 12 countries on 4 continents (22 US states, 9 Canadian provinces & 1 territory).

The Social ABCs went to India! 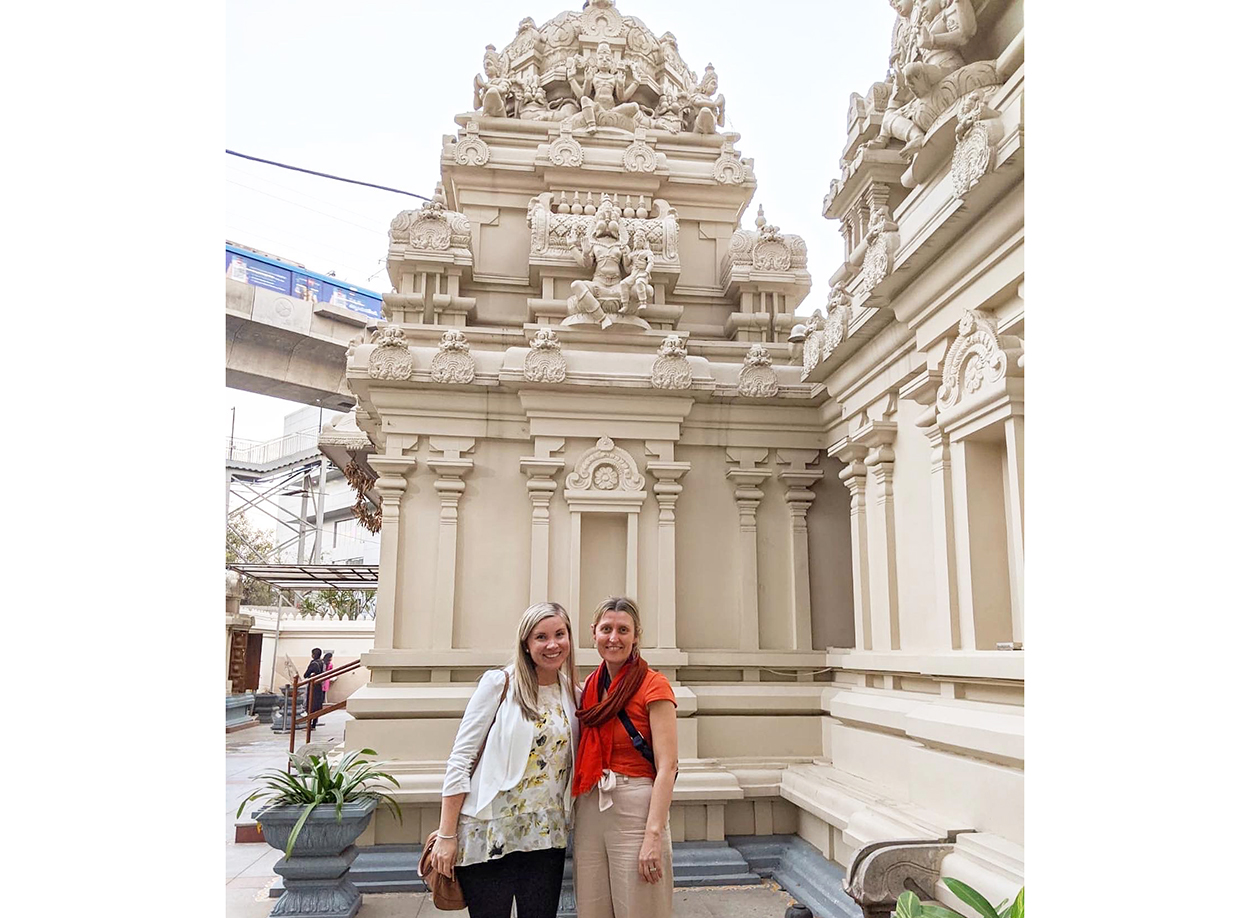 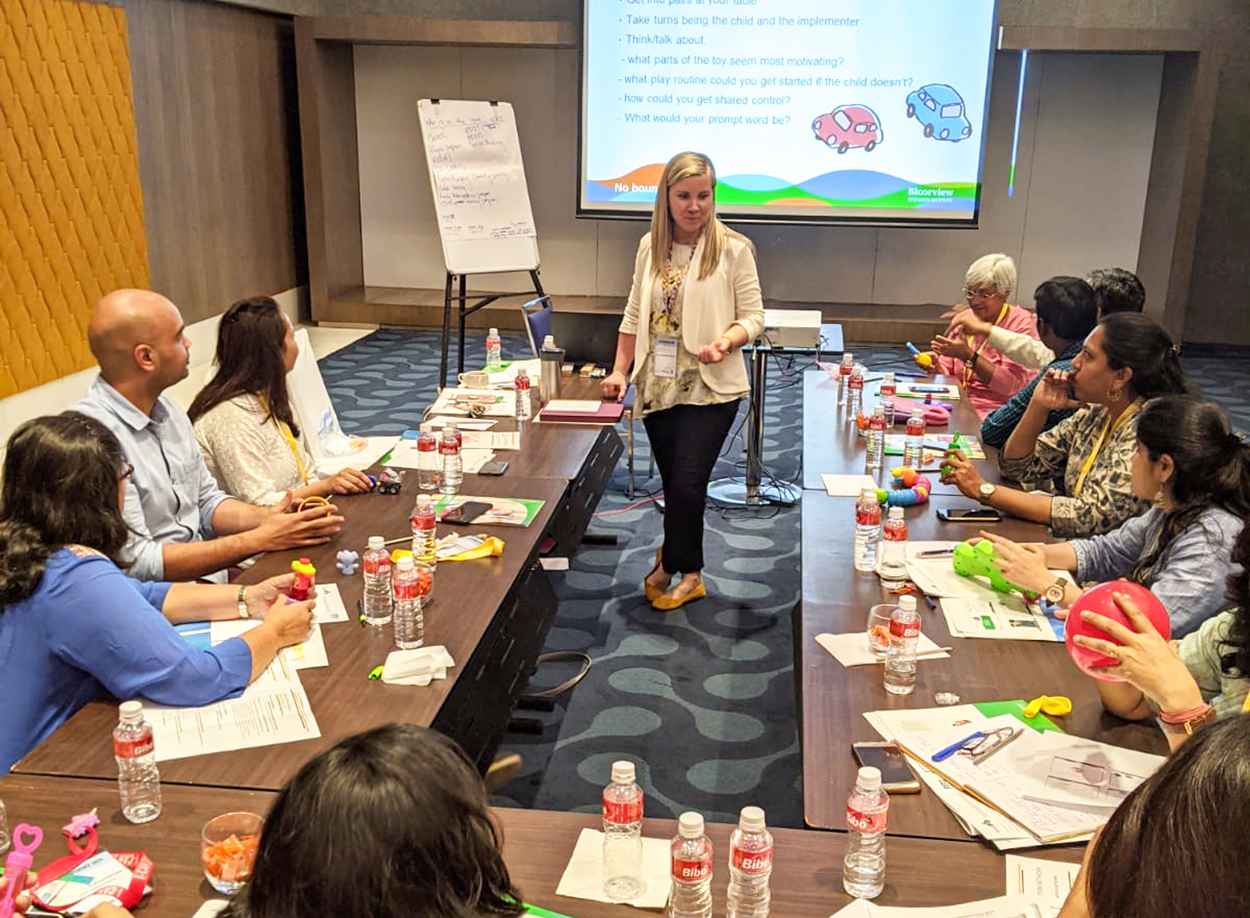 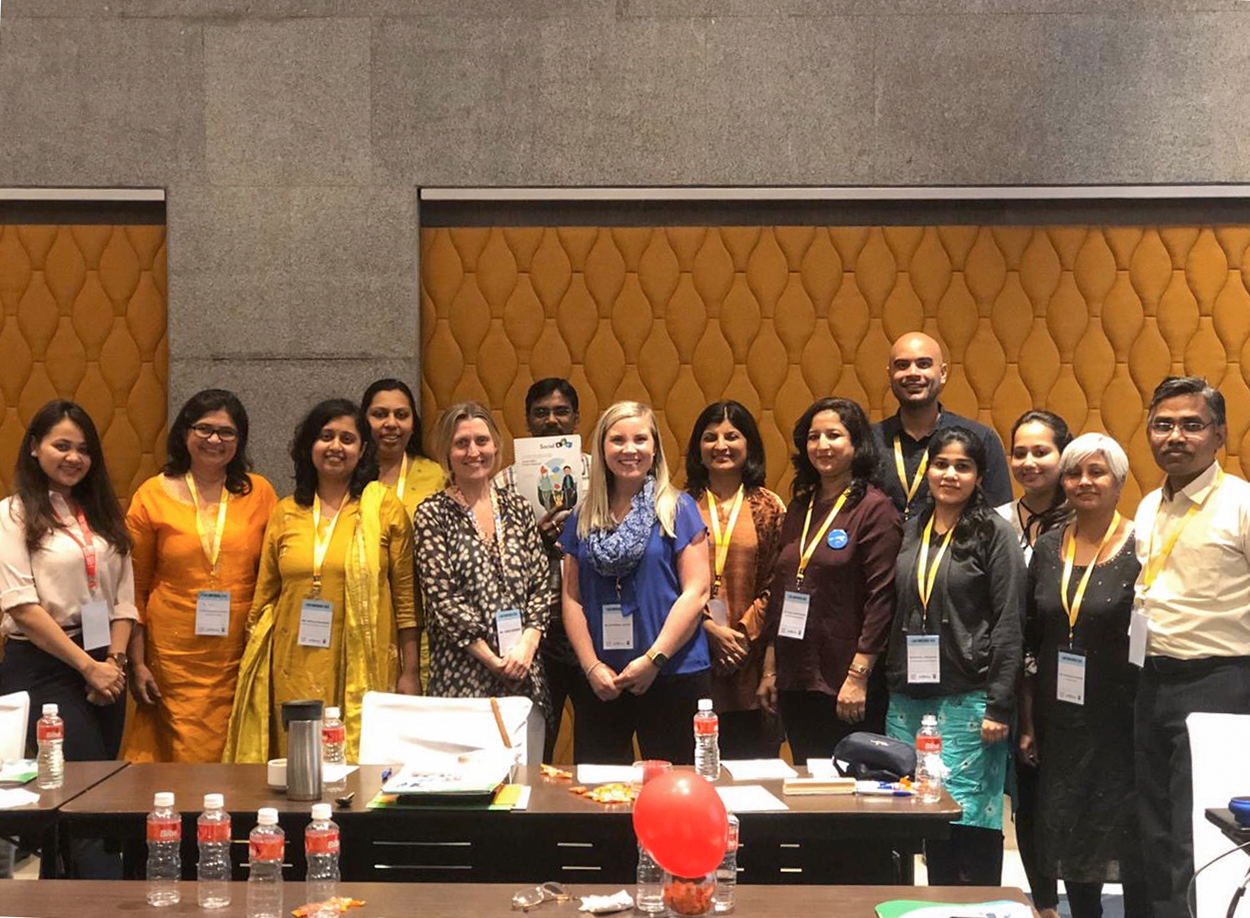 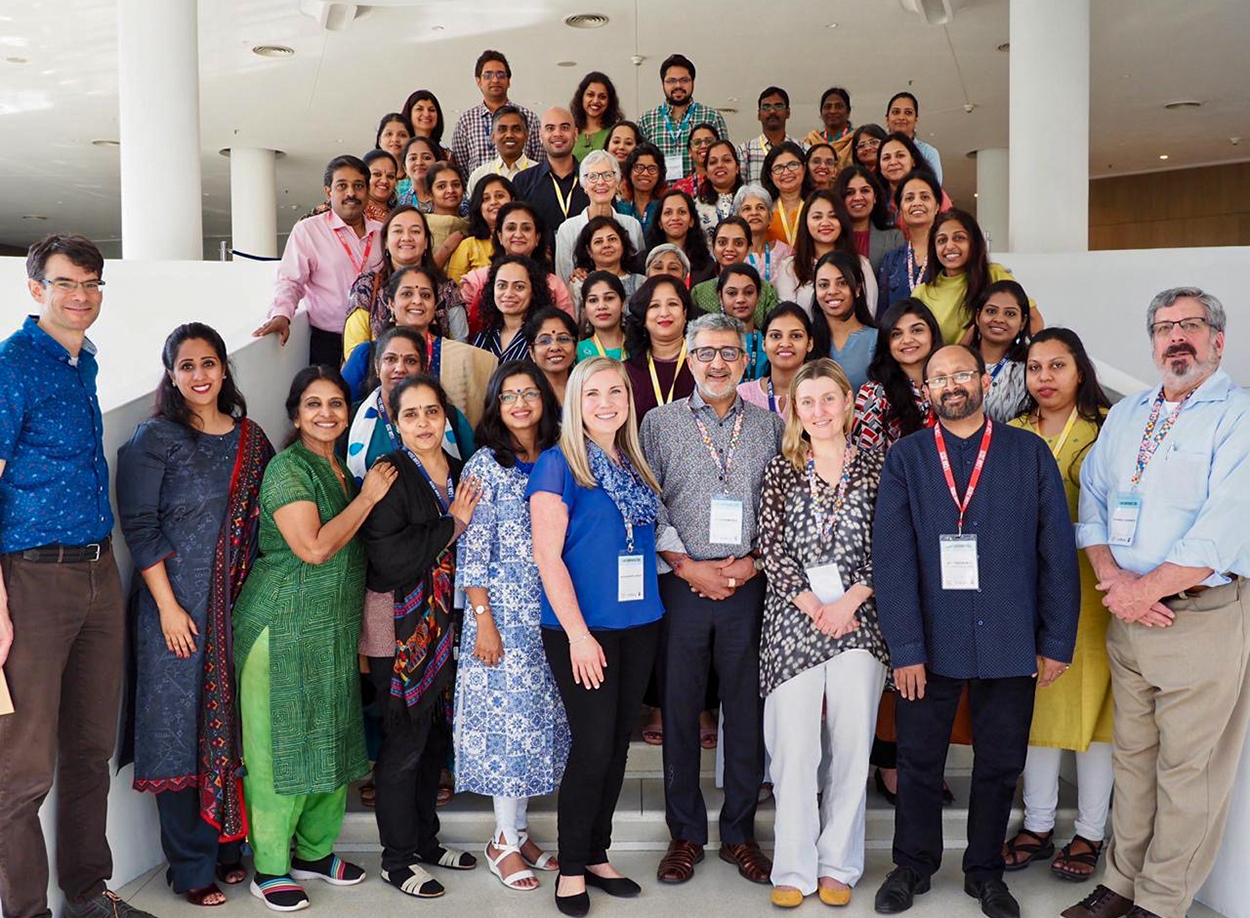 In February 2020, two of our most experienced coach trainers, Erin Dowds and Kate Bernardi, represented the Social ABCs team in Hyderabad, India. They led an introductory workshop for community partners as part of the Indo-Canadian Autism Network Symposium. The symposium, sponsored by the Divis Foundation for Exceptional Children and Kids Brain Health Network, aims to build capacity through training and developing an international network for clinicians and researchers.

See the news about Social ABCs

View the video
View the article

Have You seen Social ABCs in the News?

Please fill in the form below and share it with us.